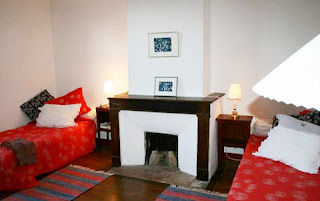 If you’ve been reading the blog posts lately, you know I’m in France. I arrived last Thursday, flying through Frankfurt to Toulouse, and spent a long weekend exploring the ancient city–the capital of the Visigoths!–about which I knew nothing. That was great, although the weather was very hot, but it was just a prelude to the real reason I came to Europe–my residency at VCCA France. So, on Monday morning, I trekked over to the train station in Toulouse, figured out the rail system (I’d already booked tickets but needed to deal with self-service kiosks to print them out), got on the train (very nice, even in 2nd Class), and got off in the town of Valence D’Agen, just about one hour from Toulouse. I was met there by someone from VCCA and then got settled into my room and studio. (That’s a picture of my room, at left.) 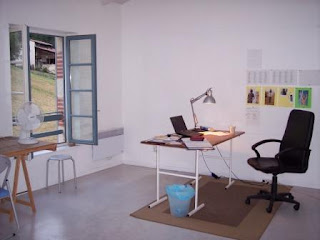 I then spent some time getting my studio set up. Since the 4 studios have to work either as visual artist’s or writer’s studios, they’re just big empty room with tables/desks, and blank walls. Which is fine. I needed to tack some outline material on the wall, but otherwise it’s pretty plain. You’ll note I’ve got big open windows and they look out on a hillside, although the first two days I kept the shutters closed because it was too hot. It’s much nicer now, so they’re wide open. 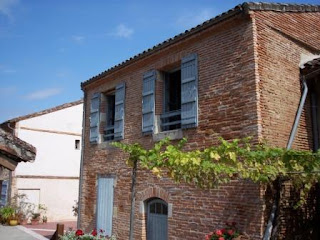 Here’s what that space looks like from the outside, complete with grape arbor and patio. Those two windows on the second floor (or “first floor” in the French style) are my studio. 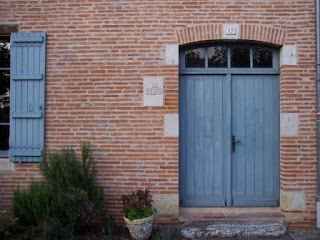 And here’s a shot of the front of the studio building. 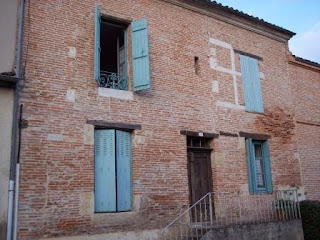 And a shot of the front of the house where we live. My room is the open window at upper left. 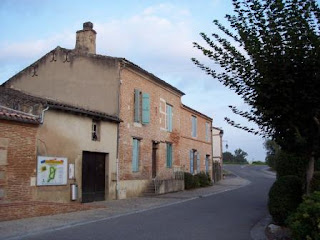 And a slightly wider angle on the house. 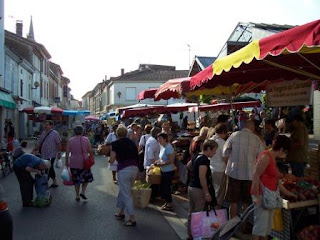 Because we cook for ourselves, it was great timing that I arrived on the day before the big weekly market in Valence D’Agen. We all went over there early to do our marketing. Lots of fun using my poor French to buy cheese, bread, eggs, yoghurt, vegetables, fruit . . . 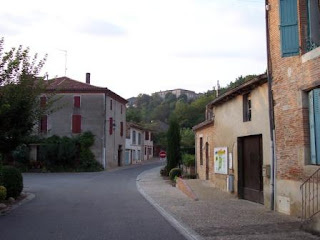 Finally, here’s a shot looking up the hill at the village of Auvillar. I’ve made one visit up there so far, but without my camera, so I’ll post some pictures of the village another day.

Oh, yeah. The work. I’ve really only had one and a half days because of the marketing on Tuesday, but I got more into it today, especially because it was more comfortable, temperature-wise. I’m hoping for a good day tomorrow!