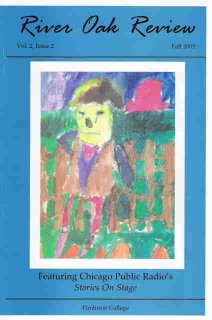 I picked up a copy of Vol. 2, No. 2 (Fall 2005) of River Oak Review on the freebie table at the IU Writers’ Conference. I had not heard of the magazine and its association with Elmhurst College (a small Chicago-area school) was noted on the cover, so my expectations were not high. And so of course I was pleasantly surprised, not only with the breadth of material presented, in both fiction and poetry, but in the credentials of the contributors.

The first story is long, a holocaust survivor story by David Evanier: “Rabbits in the Field of Strangers.”

“Oscar Schwartz interviewed me five times before he hired me. He spoke in a faltering, hesitant English, a decent education having been denied him by his fate. After the liberation he had given his brother the chance for an education. Oscar felt about himself that he was a little man who spoke inadequately with a slight Yiddish accent. He could have been a merchant in a store on the lower East Side, which in fact he had been. But now he was rich. His emotions were like pebbles in a dry creek.”

Then there’s the very short story, “Homeland Security,” by Mick Cochrane, which shows a school trip to a fire station and the resulting homework assignment for father and child to work out an emergency plan, which brings both to near tears at the prospect.

The submission guidelines say that they like writers with Midwestern connections, which I’ve certainly got. This one is worth looking at.