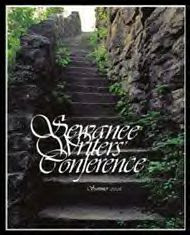 Even though I was up pretty late last night, I got up early to take a walk. The path I have taken in years past is Tennessee Avenue out toward “The Cross”–an overlook that makes our altitude up here on the plateau pretty evident. It was a muggy morning, but cool enough, and I had a nice hour’s walk.

Then, after breakfast and a little free time for those of us who opted out of the campus tour, we had the first Fellows’ reading, featuring Dorothy Fortenberry (playwright), Aryn Kyle (fiction writer), and Cody Walker (poet). They were all great and set a very high standard for all the rest of the readings!

Then came a craft talk by Wyatt Prunty, director of the conference. Wyatt, using a chapter from his forthcoming book, spoke about the poet and fiction writer Philip Larkin, and his “tough guy poesy.” Among other things, Wyatt talked about the poem This Be The Verse.

After lunch the first workshops began, but since my workshop doesn’t start until Wednesday I had time to work on critiquing the first batch of stories. (My dorm has a great little study room that most people don’t know about and I got a lot done there.)

But then it was time for a reading by Elizabeth Spencer, who was also a visitor here four years ago. To an enthusiastic crowd she read a story from her book Marilee, “A Southern Landscape.” This was a fantastic story that originally appeared in The New Yorker and when she was done she got a standing ovation. But she wasn’t done! Then she read a more recent story called “Sightings.” A very memorable reading.

We then adjourned to Chen Hall, the home of the Vice Chancellor of the University of the South for a very nice reception in a lovely setting. It was nice to meet the new Vice Chancellor–we welcomed him and he welcomed us.

Then, after dinner, another reading! This time we heard Beth Henley read from three plays, including her best known work, The Miss Firecracker Contest.

Busy day. And my workshop hasn’t even met yet!