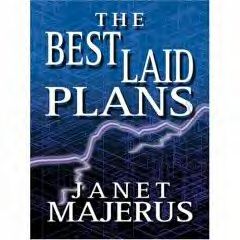 When I decided about 10 years ago that I wanted to resurrect my ambition to write fiction, I enrolled in a workshop at the Writers’ Center in Bethesda, Md. I took a workshop with Barbara Esstman and met a number of people who were nice folks and good writers. When the workshop ended we formed a writers’ group and began to meet monthly at the home of Janet Majerus, who lived at the time in Kensington, just outside the beltway (I think it was she, then, who dubbed the group the “Just Outside the Beltway Writers’ Group”). It was fun and supportive and frustrating. We were all working on different kinds of books and had different stresses and competing claims on our time, but somehow we kept going.

What has prompted this recollection is that Janet’s book, The Best Laid Plans, is coming out next week. I’m very happy for Janet. This book is her second (she published a YA novel many years ago that was made into a movie) and I know how hard she worked on it. Although I am not a fan of “cozy” mysteries, I enjoyed reading this one in its very earliest drafts and can’t wait to hold the printed book in my hands.

Long but important digression: I knew of Janet before we ever met because her ex-cousin-in-law (I think there’s no such term, but anyway my friend John Box is related to Janet’s former husband) had told me, as if writers inevitably run into one another if they live in the same city, that I might one day meet Janet. I remembered her name because of the basketball coach, Rick Majerus, and when I heard it during the Esstman workshop introductions I could barely contain myself, rushing to meet her at the conclusion of that first session. [John and I have another writer friend in common, Jana McBurney-Lin. Jana is the daughter of George McBurney, who was a partner in the same law firm where John still toils and where I spent a pretty interesting 12 years. Jana knew John when they both lived in Tokyo and I knew Jana and her husband Hui-Hui when we lived in Singapore. Man, that’s complicated. Anyway, Jana and I have stayed in touch and I’m thrilled that her first novel My Half of the Sky is also being published in July. I’ve got that one on order too, and will do a separate post about it very soon.]

But before Jana’s success and before the Just Outside the Beltway Writers’ Group could boast about Janet’s book, there were other books. At some point after we had been meeting for a while, one of our group’s founders, Mike Eisner, moved to New York. It wasn’t long after that that he published The Crusader, the novel he’d been workshopping with us, under the name Michael Alexander Eisner (to distinguish himself, obviously, from the Disney Michael Eisner). Dealing as it did with the Crusades, renewed interest in the Middle East after 9/11 helped sales, which should have reached a wide audience anyway because it was so well done. That one has been out 5 years now and is still available in paperback. And then there was Laura Weatherly. Members of the JOTB came and went. One relatively late addition was Laura, a wedding planner, who planned a series of mysteries in which the wedding planner was the heroine. I think we read most of the first manuscript, although she soon moved away from Washington. Under the name of Laura Durham (she is still using Laura Weatherly for her non-fiction wedding planning book) she has published two well-received mysteries: Better of Wed and For Better or Hearse. I’m sure there’s an endless string of wedding puns at her disposal, so I’d expect that series to go on for some time.

JOTB no longer meets, alas. I thought I would have published a book by now, but I’m very happy that these friends have beat me to it. Best of luck Janet, Jana, Mike and Laura!