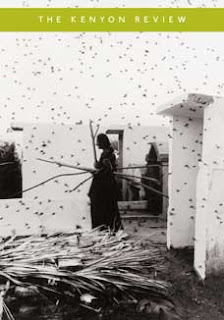 Here’s yet another 10-year-old protagonist–even though I don’t love the kid’s perspective, maybe I ought to give it a try myself. It seems popular with other editors.

Actually, in Theodore Wheeler’s “How to Die Young in a Nebraska Winter” (in the current issue of The Kenyon Review), there’s a hint of retrospection. So we don’t really see the narrator–he’s simply looking back on something that happened when he was a kid, which allows Wheeler to jump forward in time a little to resolve his story.

Mikey and Todd wake up early in the room they share. Their father, Charlie, is getting ready for work, but instead of leaving he comes into their room to tell them that Brandon has died. Brandon, it turns out, is Charlie’s first born, a child he fathered when he was in law school with a woman he had no intentions of marrying. He’s been good to Brandon all this time–the boy was fifteen–and Brandon has spent a lot of time with Mikey and Todd on family vacations, summer and weekend visits. And there is a suggestion that Charlie has a different relationship with Brandon than he does with Todd and Mikey–closer.

The boys go with their father to the funeral, where Brandon’s mother becomes hysterical, attacking Charlie. Later, Mikey’s mother explains to him the special bond between a mother and child, and that she needed drugs to calm down. Mikey asks “Is it a cheat?” And then: “Just a little cheat, right? Because no one wants to see a kid die. It’s too sad to see it through the mom’s eyes.” But his mother elaborates: “It’s not that we don’t want to see it. More like, we don’t want it to exist.”