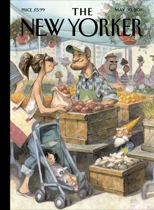 May, 30, 2011: “M&M World” by Kate Walbert
The good news is that this story is available for free. No pay wall. The bad news is that you might not like it much. I can’t say that I did. It’s pretty typical for Kate Walbert, in that the one man in the story, who isn’t even in the story except in flashback, is a cliché (which is the character Ginny’s word for him, not mine: he left the marriage because he fell in love with an intern at the hospital where he works). But, frankly, I don’t blame the guy. This Ginny isn’t exactly blameless.
Before their daughters were born, they went on a trip to Patagonia and went whale watching. Because she was trying to stay out of the sun, she stayed on the shady side of the boat, while everyone else was on the sunny side, where the crew expected the whales to be. So she got some time alone with a whale—a female, naturally—and they exchanged meaningful glances. Why are we here?
But in the present time of the story, the man (whom Ginny thinks of as “the girls’ father” and not her husband or ex-husband) is gone, and Ginny is dealing with the girls. She’s overly protective of them, which predates the split with her husband, and so the meltdown that occurs when they visit the Times Square M&M World is no surprise. The smaller of the girls disappears in the store and Ginny panics. When she is finally found, she says she was afraid Ginny had left, “too,” which Ginny puzzles over, but surely that refers to the fact that the father left.
It’s tough being a single mom in the city, and men suck. That’s what it seems to be saying. That and the fact that Ginny needs therapy . . .
I suppose I should mention what I DID like about the story. Ginny is interested in animals, a trait that has been passed on to Maggie (who carries her pre-historic stuffed critter around with her). It isn’t exactly clear to me WHY she has this connection, though, and if anyone has comments on that I’d be happy to hear them.