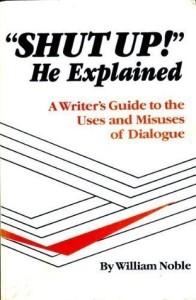 Invariably in a fiction workshop the subject of dialogue tags will come up. A dialogue tag is the bit that’s slapped onto the end of the stuff in quotation marks. “It’s critically important,” he said.

Conventionally–at least these days–writers are advised to stick with “says” or “said” (depending on the tense being used) for dialogue tags, with an occasional variation either for variety’s own sake or because what the passage is meant to convey. It’s not inappropriate to use “replied” or “answered” if the dialogue is given in answer to a question, for example. I generally avoid other tags, though, and that’s what I advise other writers. In fact, even “said” can often be left out if it’s clear who the speaker is.

The dialogue itself should be able to convey this meaning, however, so that we don’t usually need “shouted” or “exclaimed” or “screamed,” or whatever. William Noble has an excellent discussion of this subject in Shut Up! He Explained: A Writer’s Guide to the Uses and Misuses of Dialogue, now available in an inexpensive Kindle edition.

But I was reminded of this discussion recently in a workshop. We had finished going through the submissions from the writers and the workshop leader, Sarah Bowlin, Senior Editor at Henry Holt, handed out copies of “Just So” by Edith Pearlman, which appeared a few years ago in Virginia Quarterly Review. Early in this terrific story we get this exchange of dialogue:

I love this dialogue, but in the class I objected–as I do whenever I encounter it in student writing–to the use of “smiled” as a dialogue tag. For one thing, Tony’s response is funny, and so I would already guess he’s smiling. But more importantly, “smile” isn’t a verb of speech. We can speak words by saying them, shouting them, yelling them, whispering them, etc., but we cannot “smile” words. One can smile while saying them (although even that’s tricky), but there is no sound associated with smiling. Bowlin thought it was fine, as long as it wasn’t overused, and obviously Pearlman’s editor at VQR didn’t object strongly enough to change it.