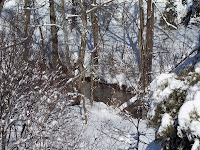 Lots of it, and it can’t be ignored any longer. We’ve been hit by two huge storms this season along with several smaller storms that in other years would have been considered major. The first big one was shortly before Christmas. I was at VCCA at the time, where we had even more snow, but at my house about 20 inches fell. Which would have been fine, but I wasn’t here to deal with it, and when I got home two days later — I couldn’t get in my driveway. I had to park in the neighbor’s driveway, hop through huge drifts to get to my door, and then shovel enough space to hold the jeep until I could clear a path to get the thing into the garage. That snow was still around a month later. . .

Last weekend we had another doozy — 18 inches fell by Saturday night, and that was on top of six inches we’d had earlier in the week. I had gone out a few times during the storm to shovel a path to the road, for newspaper and mail collecting purposes, and also in case of some emergency, but on Sunday morning you could hardly tell. I didn’t need to go anywhere, really, but I figured I should start the process of digging out. After all, on Monday afternoon I’d need to leave to teach my class. Shovel. Shovel. Shovel. And then I heard classes for today were canceled. But that was fine. I needed to get out anyway, so I did the rest of the shoveling, got the car out, and did some errands.

We now have 5 to 10 inches of snow in the forecast for Tuesday and Wednesday.

The picture above is from my porch, which also gathered a significant amount of snow.