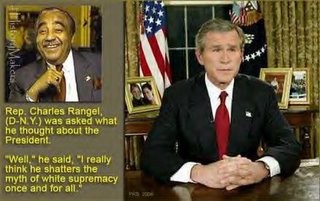 I knew White Supremacists existed, I just didn’t realize how well-organized they were. And we’re not talking KKK or John Birchers here, who are bad enough and no doubt overlap, but full-blown, Final-Solution advocating, Hitler-worshipping, card-carrying nut-jobs. The current issue of GQ has a profile of a musical (the term musical may or may not apply; they have a couple of CDs, but apparently their voices and instrumentals are amateur at best) duo called Prussian Blue. [By the way, the band and their supporting organization have websites, which I looked at, but I decided not to include links here. If you really want to see them for yourself you can Google.] They are a cute set of blue-eyed, blond teen twins who have been brain-washed by their wacko mother and sing songs advocating racism and white-pride. (The family was in the process of leaving Bakersfield because they no longer could tolerate living in “Mexifornia;” their destination wasn’t disclosed, but there were hints that they were headed to the Northwest, so look out Portland!) And among their biggest supporters is an organization called National Vanguard, that stops just short of plastering swastikas across its own website. I was horrified to learn that the national headquarters of National Vanguard is in Charlottesville, Virginia, just across the mountain from me, where their leader, Kevin Strom (who, in pictures, appears to be cultivating a slight resemblance to Hitler) lives. But don’t be complacent–they have a local branch near you. This organization was the result of a split in an organization called National Alliance, which still exists. Great. Just what we need in this country: Stupid White People have a choice of which hate-mongers to associate with.

And despite the fact that the Bush-Cheney Regime smells and sounds and looks like a fascist movement, driving our country deeper and deeper into a mess we may never be able to extract ourselves from, we can’t blame them for the White Supremacists. First, as shown in the picture above, Dubya is pretty strong evidence against white supremacy. And second, these organizations believe that Bush is a Zionist puppet, and are not big fans.