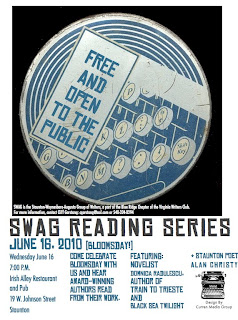 About 30 people turned out for the inaugural SWAG (Staunton-Augusta-Waynesboro Group of Writers) Reading at the Irish Alley Restaurant and Pub last night, which happened to coincide with Bloomsday. We had arranged tables cabaret-style and the Pub served drinks and food to every table. We even had TV coverage, with a crew from WHSV-3 who interviewed me and then filmed some of the reading. Here’s the clip they aired.

I kicked things off by reading the first page of Ulysses (from the copy of the book I used in college and grad school) in honor of James Joyce and his day.

Then Alan Christy read some wonderful poems. (Alan really needs to put a book together; his work is terrific and deserves a wider audience.)

And finally Domnica Radulescu spoke about the intersection of life and art and then read first from Train to Trieste, her first novel (which, coincidentally, has some references to James Joyce’s work) and from her forthcoming Black Sea Twilight, both of which deal with young Romanian women fleeing the communist regime in search of freedom, as Radulescu herself did.

There were several questions for Domnica and then she was available to sign her books, which Carey from The Sacred Circle had brought to sell.

I thought it was a complete success. First, I had hoped for 25 people and we had more than that, which was good for SWAG and also Irish Alley, who let us use the big room upstairs. Second, the readings were great–both Alan and Domnica did a wonderful job and they are both really fine writers. Third, a bunch of books were sold (including one of mine!), which was a subsidiary goal of mine. And we collected names for the mailing list for future events.

Thank you to everyone who came out for this first reading. And thanks to Carey McCallum for being on-site to sell books, to Karen Lawrence for helping with publicity (which obviously worked) and arranging for the mic and amp, and to Lindsay Curren for design of the poster.