I love going to literary events such as talks or readings by authors. They don’t happen too often in my immediate area, so sometimes I drive down to Lexington to Washington & Lee University where they have readings several times a year. I’ll drive to Charlottesville to readings at the University of Virginia or the Indie bookstore in town. Occasionally there will be a reading at another venue within driving distance, and I may get to those.

But there was very little of this happening in my own town of Staunton. (Book signings, yes, frequently by self-published authors, but that’s less of an event than a reading; it’s more about selling.)

So I started an organization: The Staunton-Waynesboro-Augusta Group of Writers (SWAG Writers), which is affiliated with the Blue Ridge Writers Chapter of the Virginia Writers Club. The mission was to promote the literary arts in Augusta County, and my idea was that I would invite writers from outside the area to come for readings, pairing them when I could with local writers, giving everyone some exposure. This has worked well. At some point, together with other “members” of SWAG Writers (we don’t really have membership–anyone can participate), we decided to start a monthly social, which we call WriterDay, copied after Writer Wednesdays that James River Writers holds once a month. That was fun, but it didn’t draw too many people, so we added an open mic component to WriterDay, and since we did that we’ve had steadily increasing attendance. WriterDay happens on the Second Wednesday of every month at The Darjeeling Café, 103 W. Beverley St., Staunton, VA. We meet at 6 and the open mic readings begin at 7pm (up to 5 minutes per reader).

But I still love the readings that we host, and I wanted a place to record the great posters that Curren Media Group has designed for those, as well as a few of the pictures from the events. 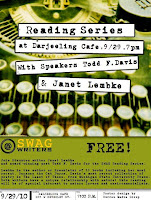 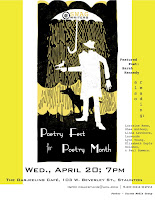 We held our first Poetry Fest in April 2011, at the Darjeeling Café, and invited 8 area poets, including Sarah Kennedy, to read. 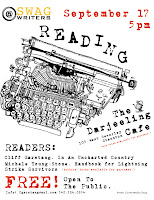 In September 2011, I shared the stage at the Darjeeling Café with novelist Michele Young-Stone. 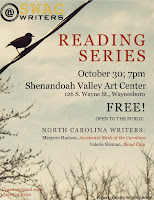 In October 2011, we hosted two writers from North Carolina at the Shenandoah Valley Art Center: Marjorie Hudson and Val Nieman. 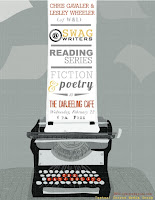 In February 2012, we invited fiction writer Chris Gavaler and Lesley Wheeler to come up from Washington & Lee University. 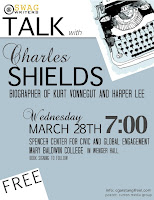 And, most recently, we hosted Charles Shields, the biographer of Kurt Vonnegut and Harper Lee, for a talk that was held at Mary Baldwin College. 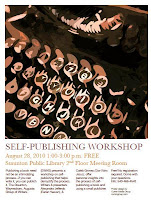 In addition to all these readings, we also want to present some panels and talks to the public. So far we’ve only done one of those, on Self-Publishing.