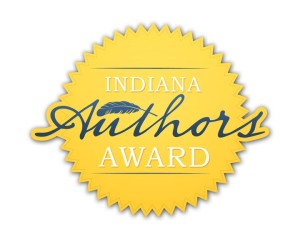 At the new year, I saw a few people posting lists of the 100 things that made their years, following the example of Austin Kleon who has posted his list for a couple of years now. I thought this was a very cool thing to do and I started making my list, but I’m afraid it will be the 4th of July before I finish it, add links, make it interesting, etc. So I gave up, resolving to start earlier this year so I can post an awesome list on Jan. 1, 2017. Stay tuned.

Instead, I thought I’d make a series of posts about some pretty great things that happened last year, mostly in my writing/publishing world, but inevitably I will stray beyond that.

So, I’ll start with the biggest thing. I won the Indiana Authors Award in the Emerging Author Category. On my list of 100 things, this was actually several of them. First, I was named one of three finalists. I had also been a finalist the previous year, so I knew what was involved, and I was absolutely thrilled to get another shot. Next, there was the anticipation–blog posts on the Awards’ website, increased exposure, support from my publisher, etc. All that was great. Then, in early October, they flew me to Indianapolis for a day of festivities–public interview, book-signing, and more–followed by the awards dinner.

The awards dinner is exquisite torture for the Emerging Author finalists, I have to say. The Indianapolis Public Library Foundation names the other winners in advance–the National Author, the Regional Author, and this year the Lifetime Achievement winner–but doesn’t announce the Emerging Author winner until the very end of the ceremony. For the dinner, I was seated at a table with family members and also some members of the panel that selected the winners (and they reported later how hard it was not to say anything to me about the award), but my mind was elsewhere. The finalists were all called to the stage to be introduced, then we returned to our seats while the other winners came up to receive their awards and give speeches. Then came the moment of truth–and I was named the winner!

I made my way up to the stage, received my beautiful trophy, and gave a very short speech that I had prepared just in case. I was happy and nervous at the same time, but the speech went well, I think, and then I left the stage to join the other winners for photographs. I’m sure I was smiling like a maniac. I really was thrilled.

Then there were post ceremony interviews to bring the evening to a close. Here is mine: