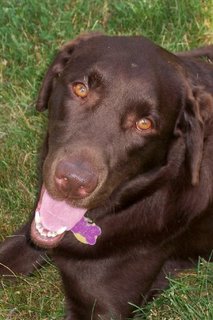 I’m sure no one (or hardly anyone) is interested in the adventures of Bhikku, but this was pretty much the only thing that happened at our house all day. We went out at about 5:30 for our daily walk in the woods and he was as excited as ever. Although we had a sunny day, rain is moving in tonight so the sky was overcast. We followed the path down the hill, Bhikku did his thing, and then zoom, he took off, and deer zipped across the path headed uphill and Bhikku took a sharp left and followed. I took the rest of our walk by myself, expecting that he’d rejoin me when he gave up the chase. But I went to our spot by the creek and there was no sign of him. I ducked under the big pine tree and headed uphill to the meadow. No Bhikku. I took a right and went toward the pine woods and called for him. I didn’t hear his tags (or his “bling” as some comic strip called them today). So I headed back to the house. He turned up a few minutes later, panting, thirsty, hungry (it was dinner time after all) and I wished he could have told me all about it.

2 thoughts on “>The Deer Chaser”