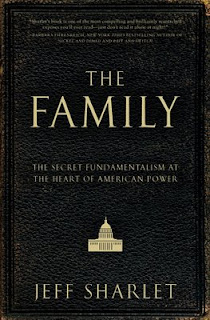 Until I learned of this book, The Family, by Jeff Sharlet, I was not aware of the organization Sharlet writes about. I knew there were conservative Christians who wanted to exert more influence in American government, but I didn’t know the extent to which they had already seized that power, or that their power extended well beyond government into corporate America and even into governments around the world.

But this is frightening. This book is important if only because it will help those who believe in the separation of church and state understand that the “wall of separation” is being attacked, and the fundamentalists are getting stronger all the time. The book isn’t strictly about the dangers that these people pose to public education and other secular activities in this country, but that’s what it boils down to for me. And the really scary thing is that it isn’t only Republicans who are part of this movement. I’m a big fan of Barack Obama, but his religion troubles me, as does his willingness to continue the faith-based initiatives of the Bush administration. These programs are dangerous, and I’m hopeful that rational Democrats will persuade Obama to move in a different direction once he’s in the White house.

In any case, this book is an eye-opener, and a must read.