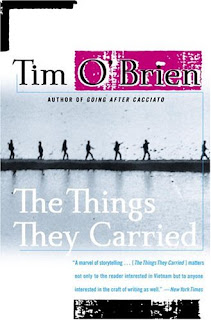 I had read parts of this book before, including the title story, which is widely anthologized. I’d also heard the author read the book’s final story, “The Lives of the Dead,” at the Sewanee Writers’ Conference in 2008. It is a wonderful book, and if you haven’t read it I encourage you to do so.

It is a fictional memoir, I suppose. The narrator has a lot in common with the author—name, profession, background, service in Vietnam. And it is impossible for a reader to separate fact from fiction. One thing the author is saying—explicitly in some cases, such as in “How to Tell a True War Story,” is that truth and facts aren’t necessarily the same thing. It’s an important lesson for writers of fiction, and for readers of fiction, for that matter: what fiction can and should do is get to the emotional truth, and the facts, what really happened, don’t matter very much.

The primary linkage in this book is the narrator, Tim, but the stories are also linked by their Vietnam setting—for a the most part, although in a few places they jump forward in time to the postwar period—and by the recurring characters, the narrator’s comrades: Kiowa, Jimmy Cross, Ted Lavender, Mitchell Sanders, Rat Kiley, Henry Dobbins, Norman Bowker. All of these characters are introduced in the opening story, “The Things They Carried,” and each features prominently in a subsequent story, but they all drift in and out of the stories right to the end.

I could find a passage to quote from almost any page of this book, but here’s one that sticks with me: “The thing about a story is that you dream it as you tell it, hoping that others might then dream along with you, and in this way memory and imagination and language combine to make spirits in the head. There is the illusion of aliveness.”

Great stuff. A book to be read again and again.