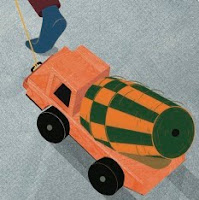 Is it safe to assume that this “story” is an excerpt from David Foster Wallace’s posthumous novel, The Pale King, due out in 2011? The voice seems consistent with other snippets of the novel I’ve seen, so even though The New Yorker doesn’t tell us this (they never do), that’s the theory I’m running with.

In which case, it doesn’t matter that this piece, as interesting as it is, doesn’t work as a story. Having said that, it’s enormously entertaining, in a David Foster Wallace sort of way. The narrator, an adult looking back at his childhood, is examining the source of his “reverence” for religion, and concludes that it derives from his parents’ tricking him into believing that his toy cement mixer was magic, that the giant mixing drum would turn but only when he wasn’t looking. The narrator relates his efforts to catch the truck off guard with stories his father told of trying to capture the tooth fairy. Except that he sees a difference – he didn’t want the magic to end, he only wanted to confirm its existence.

His belief in, or reverence for, the magic, is somehow connected to the voices he began hearing at about the same age, which he considers entirely normal:

“Nevertheless, the experience of the real but unobservable and unexplainable “voices” and the ecstatic feelings they often aroused doubtless contributed to my reverence for magic and my faith that magic not only permeated the everyday world but did so in a way that was thoroughly benign and altruistic and wished me well.”

Very nice, and makes the prospect of the novel all the more interesting.