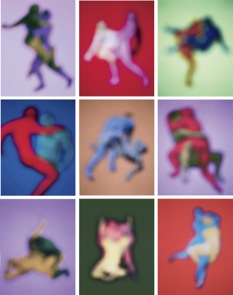 Most of this story will appeal to Saunders fans, I guess. It’s definitely got moments. The story is about Jeff, told in his point of view. Jeff is a willing participant in facility that does drug testing because, we eventually learn, it beats being the prison where he’s doing time for killing someone in a rage. We learn that some of the other participants in the trials have done even worse things than Jeff, but not before we already have a certain amount of sympathy for them. The guinea pigs here have attached to them devices (Mobipaks) that allow the testers—Abnesti and Verlain—to remotely adjust the drugs they’re being given from their command center, the Spiderhead. Saunders has come up with tradenames for these drugs: Verbaluce, which induces lucidity; Vivistif, which seems to have a Viagra effect; and Darkenfloxx, which sends the subject down a deep, dark hole from which he or she may or may not return.
On the day in question they’re testing chemically controlled feelings of love, and Jeff first loves Heather and then loves Rachel then loves neither, but in the meantime he’s had sex with each of them three times, and they’ve each had sex with two OTHER men also. But when—and this seems to be the crux of the test—Jeff has to choose whether Heather or Rachel will get the Darkenfloxx, he can’t do it. He is equally indifferent to both of them. Eventually, though, he is forced to watch what happens, unless he can “Escape from Spiderhead.”
Take a look at “This Week in Fiction” for a hint from Saunders about what he was after here. It seems to me that the choice that Jeff must make is crucial and that the artificiality of everything today makes real feelings suspect.
Didn’t love the ending, but otherwise it was entertaining.
December 20 & 27, 2010: “Escape from Spiderhead” by George Saunders