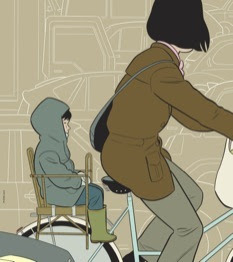 This story isn’t as good as the last Yiyun Li story in The New Yorker (“A Man Like Him”). After the first couple of paragraphs it’s fine, but the beginning is so confusing—too many characters are introduced with too many relationships for the reader to keep straight—and I wonder if everyone has the patience for that sort of initial floundering. Siyu and Hanfeng are two unmarried people that Hanfeng’s mother is trying to set up. They are much older than typical unmarrieds in China, and there are some suggestions for the reasons. Because they were raised by single parents, they don’t seem to recognize the urge to marry. Siyu convinces herself that she admires Hanfeng’s mother and that’s why she hasn’t married. There is a hint that Hanfeng may be gay and that’s why he hasn’t married, and there is even an indication that both his mother and Siyu understand this. No one seems to care. They are all resolved that the absence of loneliness is worth putting up with unhappiness. And so Siyu agrees to marry Hanfeng in order to be with Hanfeng’s mother, and Hanfeng agrees to marry Siyu in order to satisfy his mother, and they will all live together in Beijing, lonely no more.

All of which is interesting enough and satisfying, except for that awkward beginning. But what’s really interesting here is the backstory of the engaged couple. Siyu’s mother killed herself when Siyu was an infant. Hanfeng’s father was killed in an accident when he was a child, but here the important fact is the guilt that Hanfeng’s mother has carried all these years for having wished her husband dead. (The suggestion is that it is Hanfeng’s mother and father who were the “Gold Boy” and “Emerald Girl”—an arranged marriage that ended unhappily.)

The result is an interesting sketch of modern China, but in a story that in the end doesn’t quite work.