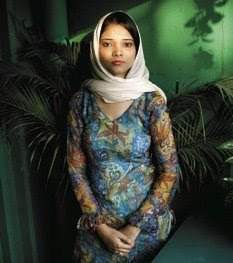 This is Mueenuddin’s second story in The New Yorker in the past couple of months, and third since August of 2007. While the story is engaging and readable, in large part because of its lavish and exotic setting, it isn’t as successful as the earlier stories, and I didn’t think its language or the characters were particularly interesting. Although point of view isn’t consistent (mostly we have Husna’s point of view, but sometimes, unnecessarily, we slip into Harouni’s thoughts), the story is about Husna, a young woman from a declining family who comes into the household of K.K. Harouni, a wealthy resident of Lahore. (Harouni was also the name of the wealthy man in the previous story, so I assume there is a connection, but it doesn’t seen to be the same man, since that man was married to an American.) Husna has a heart, we’re told, but she’s also somewhat ambitious and greedy, although she isn’t educated enough to know how to be seriously greedy—she could accumulate much more than she does. She becomes Harouni’s mistress, even though that wasn’t his thinking when she came into the house, and just as her power in the household appears to be growing—she even wants Harouni to tell his daughter to be kinder to her—he has a heart attack. The daughters do not treat Husna well, which is no great surprise to her, or to the reader.

The story appears to be the title story of a linked collection due out in a few months from Norton: In Other Rooms, Other Wonders.

December 1, 2008: “In Other Rooms, Other Wonders” by Daniyal Mueenuddin