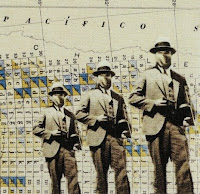 This is the one story in this double issue that I didn’t love. And the main reason for not liking it is that the bulk of the story is a dream, and fictional dreams are, to me, undermining the fiction. It’s ironic, since the whole thing is made up anyway, but when a dream is layered on top of the fiction, the fiction itself becomes unbelievable to me, and I don’t see the point of unbelievable fiction. (Even science fiction, fantasy, and magical realism have to establish their own realities within which the story can occur; dreams even in those worlds bend the rules unacceptably.) So it was a disappointment to me when this story began with a dream in which the narrator, who has the same name as the author, is taken to a meeting with Enrique Lihn, who the narrator knows to be dead. The story of that meeting is clever and interesting, but since the whole thing is a dream it is hard to care. Except for this, which very nearly redeems the story for me: near the end of the meeting, Lihn says, “You’re not going to believe this, Bolaño, but in this neighborhood only the dead go out for a walk.” Suggesting that it wasn’t a dream at all, but that the narrator is dead and has indeed come to meet with Lihn. I don’t know when this story was written, but the author died in 2003, which makes the story more appealing. So, I don’t love this story, but I can imagine that some might. I hope fans of the story will comment and explain their views.