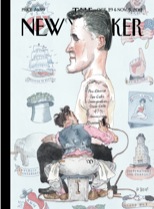 Although the opening of this story confused me—I guess I was supposed to know that Barry is Irish or that the Ox Mountains are in Ireland—I was immediately attracted to the language. (I’ll come back to that in a minute.) There were fresh combinations of words and some expressions I didn’t understand (and, at the time, didn’t guess that this was because they were Irish) but that still appealed to me. The first line is “He had been planting babies all over the Ox Mountains since he was seventeen years old.” Baby what, I wanted to know. Oh. I get it. Babies. “Well he had the hair for it, and the ferret grin, and there was hardly a female specimen along that part of the Sligo-Mayo border that hadn’t taken the scan of his hazel glance, or hadn’t had the hard word laid on, in the dark corners of bars, or in the hormone maelstrom of the country discos, or in untaxed cars, down back roads, under the silly, silly moonlight.” And so on.

The language is often lyrical, and Barry alludes to this in the Q&A with Kevin Barry: “The rhythm of the prose works off refrain and reprise. At the level of the sentence, what interests me above all is its sound. I will happily subvert a sentence’s meaning for the sake of how it sounds, and then just go with whatever change results; I’ll let the sound dictate the story.”

I believe that. While the language is sometimes a little difficult to follow, it’s always beautiful. In the Q&A Barry also tells us that he is fond of introducing both genre elements—he sees this story as something of a Western—and non-realistic elements. Here, one of the two main characters does seem somewhat supernatural, and the other is sure he can sense what is going to happen.

The story is almost beside the point, but there’s this: Sergeant Tom Brown is pursuing “a Canavan”—part of a notorious family because he has the sense that there’s going to be a killing. He tracks Canavan down to the home of a woman who has been beaten and she reluctantly tells Brown where Canavan might be found. Importantly, Canavan has cancer and is going to die, which makes him even more dangerous. (Although he’s only 29, he’s been told that treatment would make his hair fall out—his beautiful hair!—and render him impotent. So he’s opted to forego the treatment.)

Barry tells us that both characters are something of a “type.” But what do you suppose is the significance of Canavan’s cancer, or that Brown, at 67, is also nearing the end of his life. Are the types disappearing? Is this aspect of Western Ireland disappearing? And is that what it means at the end when Brown finally confronts Canavan?