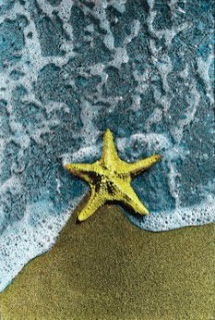 We’re not quite done with The New Yorker’s 20 Under 40 series, but I think this one is my favorite of the bunch so far, and not just because it does not seem to be an excerpt from a novel (although Obreht’s “The Tiger’s Wife” that appeared in TNY last year is an excerpt from her novel that is due out this fall).

This story is about a boy, Jack, who lives in the hotel that his mother manages. (Since the story, according to the Q&A with Téa Obreht is inspired by the period when Obreht lived with her family in Egypt, let’s say that’s the setting.) As the story opens, some articles of clothing belonging to a Frenchman have been found on the beach, and the lifeguards and local fishermen are trying to determine what happened to the Frenchman. Then one of his flippers turns up, and they’re all afraid that he’s drowned. They go to inspect the man’s room and discover his sketches of sea life, including a big turtle, but his pencils are missing. We understand that Jack knows something:

“‘But where are the pencils?’ Mr. Hafez is saying as he lifts up the pages one by one and looks under them. Jack does not tell him.” Hmm. What does Jack know?

It turns out that Jack observed the Frenchman the previous morning doing his sketches and they were both present when a tortoise was freed from a fishing net, although the tortoise had a crack in its shell. For the benefit of the tourists a fisherman says a shark is responsible, but Jack knows he really thinks the Djinn did it. The story then lapses into an explanation—it’s short, though, and interesting—about the Djinn.
At this point, the story has our complete interest. What does Jack know? Where’s the Frenchman? And what about this Djinn?
It is revealed that Jack saw the Frenchman being carried off across the water—by the Djinn! Jack didn’t see the Djinn, but the Frenchman appeared to be sitting on the waves while he was being carried off. He called for help, but Jack wasn’t allowed in the water and there wasn’t time to run for help.
Eventually, the Frenchman’s body turns up, but there is still no explanation. And that brings us to the unsatisfactory ending of the story—Jack falls asleep on the beach, and it seems to me that the last six paragraphs are his dream: he wakes up and there is silence, and the water is gone. But no, not gone, but the tide is much further out than Jack has ever seen it. He is able to walk out to the shipwreck where the Djinn live—although his feet are cut by the corals and rocks. He is doing what he has been too afraid to do up until now, and then he sees “it” — which seems to be a tortoise. And that, apparently, is meant to explain the mystery of the Frenchman’s disappearance—he rode to sea on the back of the tortoise and drowned.
I suppose it isn’t necessary to conclude that Jack is dreaming at the end, but I think that’s what’s happening—and dreams in fiction almost always annoy me. If he’s not dreaming, how do we explain his courage in walking to the shipwreck when he’s been timid before? Why is he shown falling asleep on the beach? So, until the ending, I liked the story a lot.
August 2, 2010: “Blue Water Djinn” by Téa Obreht
Other views?