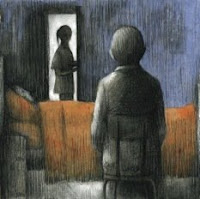 This is a sneaky little story. Not much is happening, although there are some questions in the back of the reader’s mind, like—where’s the mother? who is this narrator and does he have any other family?—and these are important questions. So here’s the situation: Paul lives in Dublin but is a dutiful nephew to his Aunt Josie who lives out in Enniscorthy, which seems to be an hour or so outside the city. Paul was raised by the Aunt, although we don’t at first know why. As the story begins, though, she takes a fall and needs care, which leads Paul to place her in a nursing home, a home that seems to be pretty nice. She hates it, of course, and wants to go home, even though Paul’s visit to the house tells the reader that the house isn’t so great. Still, he understands it’s all about independence and he feels guilty for leaving her.

So, what is their relationship? It turns out that his mother was an alcoholic and it further is revealed that the mother who many years ago had left the area has now returned. Will she come back into Paul’s life? Aunt Josie seems to want him to promise that he won’t see his mother, although that is partly guesswork on Paul’s part. It also is revealed that Paul is gay, and that it isn’t entirely clear whether Aunt Josie ever knew that. When Josie finally dies, Paul ponders the promise that he made never to see his mother, and it is this on which the story really hangs.