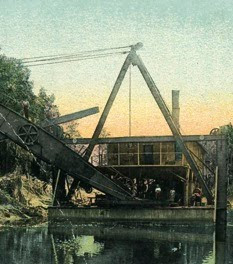 Because the ending of this fiction is so odd, I was under the impression that it must be an excerpt from Russell’s forthcoming novel Swamplandia! (what’s with exclamation points in titles, these days?), but in discussing her inspiration for this piece (see Q&A with Karen Russell) she makes it sound more like an outtake than an excerpt:

What was the inspiration for the piece included in the “20 Under 40” series?

I was working on a novel draft for what felt like the thousandth year, doing some pretty heavy research into Florida history and the Army Corps Dredge and Fill campaign, and this little story within the story opened up. I wanted to try a sort of fantastical-historical story—Hitchcock meets the swamp.

So, I don’t know. I don’t think it works very well as a short story, but I do think Russell has a winner in the character of Louis Thanksgiving, the too-cheerful boy who was born dead but who has managed nonetheless to become a teenage dredgeman in the Florida swamps during the Depression. Louis is first hired onto a boat with a crew he comes to love. But when that contract ends, his new situation is less wonderful. He’s still cheerful and happy to be working (and not to be with his awful foster father), but the conditions deep in the swamp on this boat are grim, and his co-workers view him suspiciously.
There’s an accident—it’s an old boat—and then . . . what happens? He’s off duty, watching a pair of otters when a roar erupts from the engine room just 25 feet away. Whatever has happened, his brain is in a fog and he’s not seeing too well. He discovers he’s bleeding, and now he’s pitched forward onto the railing. But then he makes it to the engine room and sees Gideon, who seems dead but then isn’t. Then, almost immediately, the buzzards arrive by the dozens—but this isn’t the behavior of any buzzards I know, and so I’m beginning to think something else is afoot here. The crew is familiar with turkey vultures, but these birds are different—they look to Louis like “funeral umbrellas.” And then: “In a scene that seemed as plausible and as horrifying as Louis’s worst dreams, the birds descended on Gideon and hooked the prongs of their talons into his skin; perhaps a dozen of them lifted him into the sky. Gid’s body shrank into the cloudless expanse.” Gideon. Taken by dark angels. Hmm.
And then the birds come back—hundreds of them. Uh oh. But Theodore, another crewman, says they’re all safe because they’re alive, and the birds are just filthy buzzards. You sure about that, Theodore?
I feel sorry for Louis, though.
July 26, 2010: “The Dredgeman’s Revelation” by Karen Russell