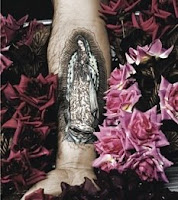 Although I don’t have any real complaints about this story, and it kept me engaged right to the last sentence, I can’t say I loved this story. I don’t know why. Maybe it was because of the stereotypes—the shiftless Hispanic man, the clueless, pregnant teen—but these characters are set against a backdrop that is anything but stereotypical, so I’m not sure that’s really the problem.

Anyway, the story is that Amadeo is 33 and he has been selected this year, thanks to his uncle, to play the role of Jesus in the town’s Passion Play, which the town takes very seriously. He seems to understand that he has been wasting his life, and he wants to prove something to himself and the town, and he also wants to feel. As it turns out, Amadeo has a fifteen-year-old daughter, Angel, who is pregnant. Angel has been living with her mother, whom Amadeo never married (in part because he hit her once and was afraid he might do it again), but now, right before the Play, she comes to stay with her father.

Angel has made a mistake, but she’s interested in doing the right thing for her baby, even though she is awfully young and doesn’t really understand the consequences of what has happened. Still, she tries to help her father and is horrified by the pain he endures in his role as Jesus. Amadeo, on the other hand, realizes, despite his expectations, that he is not the son of God—he feels pain and fear, and although for a moment he had thought he was enduring the suffering to save his daughter and her baby, now he knows he can’t. The cycle that produced him and Angel, will continue. The people, on the other hand, are, as usual, blind.