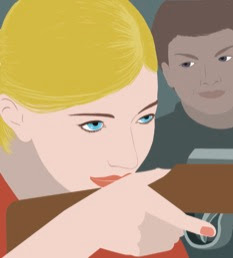 Begrudgingly, I have to admit that this excerpt from Bezmozgis’s novel in progress, The Free World, works pretty well as a short story. I think if he had conceived of it as a story he could have dispensed with a lot of the backstory concerning Polina and Maxim—the fact that she had an abortion and then they got married is pretty much all you need to know about that. The real story is about Polina and Alec.
That said, I like the character of Alec and the way he worms himself into Polina’s bed and the dilemma he puts himself in when her pregnancy potentially screws up his plan to emigrate. (He bets her that he can beat her in a shooting competition and the prize is that she’ll go on a date with him, although she’s still married; he barely wins.) In the end, Alec plays his cards pretty well—he’s not the fool that Polina’s coworker Marina takes him to be.
The story is about how the Soviet Union was every bit as bleak as we think it was, although it also had sparks of life to it. And, of course, it’s about taking responsibility and making choices, which both Alec and Polina are trying to do.
Not bad. Check out the Q&A with David Bezmozgis
August 9, 2010: “The Train of Their Departure” by David Bezmozgis