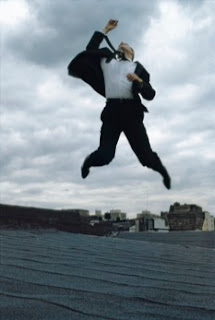 Huh? So the man (who has no name, which means he’s “everyman” I suppose) plays hooky from work and watches TV, but realizes that he’s watching himself. When he returns to work, he sees that his TV self has done more work than his real self usually does. And it turns out on other channels his other self is a surgeon, an undercover agent, etc. Eventually “the man” decides to stop watching TV and throw it away, but on his way down stairs he runs into himself bringing the TV back, and those two run into another and . . . it’s like looking into a mirror with a mirror. There are too many of him to keep track of. He’s not going to work, he sobs uncontrollably, and he’s got the TV plug in his hand. Huh?
This story reminds me of The Knocking from a few weeks ago—the language is interesting, the twists are compelling, but what’s it all mean? Are we meant to think that some of what “the man” is watching on screen is real? Or that some of it represents his ambition? Or fantasy? Did he really want to be a surgeon? Does he dream of closing big deals? Did he lose his wife? Is he sobbing uncontrollably because he’s stuck in his dead-end job with no way out except his fantasies?
Perhaps. Comments?
April 12, 2010: “The TV” by Ben Loory