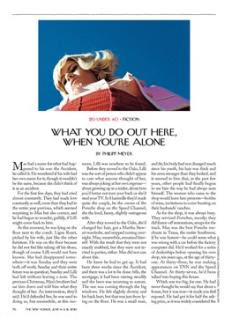 This story reminds me of a T.C. Boyle story in Harper’s earlier this year. Max, a Porsche mechanic with a successful business, is married to Lilli, trailer trash who, with the help of his money, as cleaned up her act. They’ve moved from Huntsville to a suburb of Huston that he hates, and now she’s ashamed of him. There’s already tension, but the story begins when they’re dealing with the aftermath of what Max thinks of as “the Accident”—their son having had his skull mashed during a night in jail after a cocaine bust.
Max is making plans, though, and that’s what the story is all about. Moving on. Resisting the temptation of the next-door neighbor. Coping. I don’t quite understand Lilli or her motivation, but Max I like.
And I like the ending, too, with Max having a clear vision of where he’s going. Whether he’ll actually go there is another question.
It’s a good story. Not great.
[available online only to subscribers, but here’s a Q&A with Philipp Meyer]
“What You Do Out Here, When You’re Alone” by Philipp Meyer