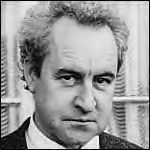 The Sea, which won the Man Booker prize last year, is a beautiful disappointment. The novel tells a story that is not particularly interesting, about a man who is not particularly interesting, but in language that is some of the most rich and lyrical that you will read in modern literature. For me, although I appreciate it, while I relish the long, languorous paragraphs, that is rarely enough to satisfy me, and so, here, the novel disappoints.

It is the story of Max, a gentleman who has retired to a house by the sea, a house that he knew as a child living with his family in poorer holiday quarters. We learn early on that he has lost his wife, and so we are treated to parallel flashbacks—one of the diagnosis and decline in his wife’s health, one of a formative incident in his childhood involving the Grace family, who lived in the house. At the same time, Max is in a bit of a struggle with his daughter Claire, and their changing relationship is also revealed as the two flashbacks progress.

Max and Claire take a drive, both dealing with their grief, in their own ways:

“In the flocculent hush of the Golf Hotel we seemed, my daughter and I, to be the only patrons. Claire wanted afternoon tea and when I had ordered it we were directed to a deserted cold conservatory at the rear that looked out on the strand and the receding tide. Here despite the glacial air a muted hint of past carousings lingered. There was a mingled smell of spilt beer and stale cigarette smoke, and on a dais in a corner an upright piano stood, incongruously bespeaking the Wild West, its lid lifted, showing the gapped grimace of its keys.”

Flocculent? In fact I chose this passage because I wanted to type the word “flocculent” which, I am absolutely certain, I have never typed before in my life, have, I think, never seen before in my life until I came upon it on page 43 of this book and had to look up. Go ahead. Look it up. I’ll wait.

Here’s a terrific, long interview with John Banville at The Elegant Variation.