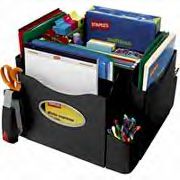 is a mess. Not really, but it could be neater. Which is why I’m alway looking looking for storage solutions. Not long ago I acquired a cheap, but not unattractive, credenza–more shelving, more cupboards, more drawers, more surface space. Somehow it all filled up. At Staples yesterday (I needed a printer cartridge–it was a legitimate visit, but I do sometimes just wander around looking at machines, notebooks, pens, software; it’s almost as much fun as a hardware store) I saw the brilliant little device pictures at right: The Desk Apprentice, which apparently was invented during an episode of The Apprentice, although since I haven’t seen that show I couldn’t tell you for sure. Anyway, I love it. It does take up a fair amount of room, which is an issue, but it also absorbs all the loose items that were floating around on my desk that I would never have bothered to stick in a drawer, even if I had a drawer left to stick them in: pens, paperclibs, folders (all drafts of ongoing stories fit neatly into the “bucket” in the center of the thing), prepared SASEs, etc. And it spins, for easy access to everything. It’s a miracle.

But speaking of Writers’ Desks, there’s a fun little book you might want to take a look at: The Writer’s Desk by photojournalist Jill Krementz, with an introduction by John Updike. It includes wonderful photographs of the workspaces of dozens of writers, including John Irving, Edwidge Danticat, Russell Banks, Joan Didion, Tennessee Williams, and many more. I had already read this book when I met and worked with Russell Banks in a workshop in 2004 and I mentioned to him this photograph of him in his study. There’s a model of a school bus on his desk, which I associated with The Sweet Hereafter (although I discovered later when I read Rule of the Bone that a school bus features prominently there as well). He said that after the book appeared, or maybe it was after the movie came out, people from all over the world sent him models and paintings and drawings of school busses, and that was one of them.

My space is not nearly as interesting as those in the book, but at least, for now, it is better organized than it was.