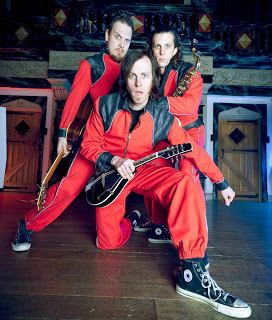 Make that: Return of Return to the Forbidden Planet.

The American Shakespeare Center did this show six or seven years ago. I remember enjoying it thoroughly, so I was looking forward to this new production. I wasn’t disappointed.

It’s a silly play, of course, so it’s essential that the actors don’t take themselves seriously. As a spoof, it’s meant to be over the top, and that’s what it is right from the beginning. It’s loosely based on The Tempest, but very loosely. Mostly it seems an excuse to string together a lot of old pop tunes, which this very musical cast does a great job with.

The whole cast did a great job: Dylan Paul is Captain Tempest and Emily Brown is Miranda, his love interest and the daughter of Prospero, the mad scientist, played by Rene Thornton Jr. Greg Phelps, who played Tempest last time around, is Cookie, the hopeless romantic, and Lee Fitzpatrick plays the Science Officer. The rest of the cast is excellent, too, and it’s wonderful that the cast is the band and the band is the cast. Everyone plays instruments–trumpets, guitars, banjo, trombones, xylophone, piano, clarinet, cello. (Chris Johnston–one of the most amazing musicians you’ll ever meet–is music director for this show and he’s clearly done a fantastic job.)

It’s a terrific show and you won’t want to miss it.