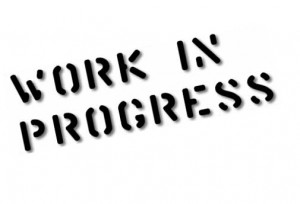 45 thoughts on “Tips for Writers: In Progress (What the heck does that mean?)”