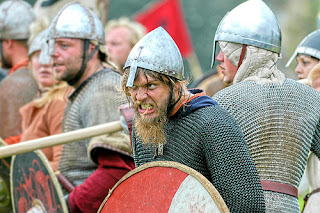 You may have heard—or maybe you haven’t—that given a choice, a writer should choose an Anglo-Saxon word over one with Latin roots. Or at least that’s what more than one teacher has told me. English words of Anglo-Saxon origin tend to be “closer to the soil”—concrete and precise, shorter, sharper—whereas words of Norman French origin (which infiltrated the language following the Norman Conquest) are more elevated—softer, vaguer, and longer.
Using a Latinate word isn’t wrong, obviously, but as this article suggests, word choice definitely plays a role in establishing the voice of your writing: Word Origin Influences Your Writing Voice. For example, for both rhythm and sound reasons, I like to end a paragraph with a strong word, something with punch. But if an educated person is speaking, he or she may tend to use Latinates.
Last week I mentioned Strunk & White’s The Elements of Style. One of that book’s pronouncements is “Avoid fancy words.” This is good advice. To that end: “Avoid the elaborate, the pretentious, the coy, and the cute. Do not be tempted by a twenty-dollar word when there is a ten-center handy, ready and able. Anglo-Saxon is a livelier tongue than Latin, so use Anglo-Saxon words. In this, as in so many matters pertaining to style, one’s ear must be one’s guide: gut is a lustier noun than intestine, but the two words are not interchangeable, because gut is often inappropriate, being too coarse for the context.”
Here is a list of some common words and comparative derivations. And, of course, a good dictionary will be a help. Look for words that are from Old English rather than Old French.