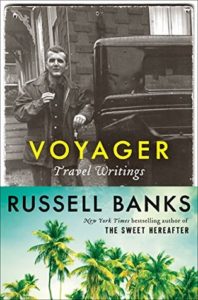 In 2003, shortly after I finished my MFA program, I saw an advertisement in Poets & Writers for a writing workshop in Mexico featuring Russell Banks. It seemed ideal for me. Although I spoke no Spanish, I longed to visit Mexico; plus, I had read a couple of Banks’s novels and greatly admired his work.

So I enrolled in a Spanish language class at the local community college and made plans to travel to Mexico the following January, first to visit Mexico City and then on to the village of Tepoztlan for the workshop, called, after the great novel by Malcolm Lowry, Under the Volcano.

The experience exceeded my expectations, by far. The village was stunning–situated at the foot of a mountain, picturesque, peaceful, excellent food–and the workshop faculty and other students made for one of the most enjoyable weeks I’d ever had. The highlight was working with Banks, who was an engaging and jocular teacher. We did good work in class (usually outside on the terrace of the beautiful hotel where we were staying) and then we also managed to enjoy time with him on local adventures and in the cafes and bars.

One of the adventures was exceptional. The Director of the program, Magda Bogin, had arranged for us to experience a traditional temazcal (sweat lodge) in a nearby village. We were segregated by gender, so Banks, Tim Weed (a fellow student in the workshop who has been a friend ever since), and I, disrobed and climbed into a structure that looked like an adobe igloo. There was room for the three of us to lie down side by side, which we did, waiting for the heat to build as the fire under our igloo was stoked from outside. It’s called a sweat lodge for a reason, and soon we were soaked. Part of the exercise involves being whipped on the back (gently) with branches (were they eucalyptus? I don’t remember, but something fragrant), and we took turns: Tim whipped Russell, Russell whipped me, I whipped Tim. After we’d spent sufficient time in the heat, we were invited out to rest in a cool, dark room and to sip herbal tea to rehydrate. After another hour, we returned to Tepoztlan.

The temazcal aside, I remain a fan of Russell Banks’s work, so when I saw that he had published a collection of travel essays, I got a copy and started reading immediately. Part of me hoped that the Tepoztlan experience (if not the sweat lodge) would be recounted in the book, so I was mildly disappointed that it was not, but the essays are all instructive tales of other voyages of personal discovery, ranging from an extensive trip he took through the Caribbean when he was courting his fourth wife, to a visit to Senegal, to mountaineering in the Andes and Himalayas. Banks draws a distinction between being a tourist and being a traveller, at all times focusing on the journey rather than the destination.

One thing I admire about this work is the respect that Banks shows for the places he visits and their people. He recognizes that as a white American male he comes from a place of privilege, despite his very humble background, and he would much rather have a genuine local experience than the homogenized tourist experience that could take place anywhere. Often travel writers put themselves in impossible situations and disparage the locals for failing to rescue them. That’s not the case here.

The last time I was in touch with Russell was 2014 when Volume I of Everywhere Stories came out. I wanted to send him a copy because, as the editor of the anthology, I had included work by Tim Weed (of the temazcal) and Alden Jones, both of whom had been in my workshop with him back in 2005. He was pleased to hear that we were all still in touch and writing. I hope he enjoyed the book.