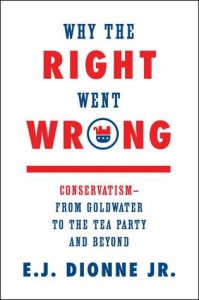 Why the Right Went Wrong: Conservatism-From Goldwater to the Tea Party and Beyond

This book is the selection for this month for our political book club, Reading Liberally. It is essentially a history of conservatism in America over the last 60 years or so, beginning with Goldwater’s departure from Eisenhower’s Modern Republicanism as implemented by Reagan and deepened by the Tea Party and its various adherents, including the backlash from G.W. Bush’s “Compassionate Conservatism.” Near the end of the book Dionne writes about the leading contenders for the 2016 GOP nomination for President, and what they each mean for the movement. He also points to some contemporary writers who have argued for reform on the Right (“Reformicons”) and observes that they in some ways would be taking the party back to the days of Eisenhower.

Given the rhetoric we hear from Republicans every day, I’m not optimistic that this will happen, although the party’s need to reach a different audience is becoming clear to them. The rich folks have only so many votes.

The book is a bit of a slog at times, but it’s a useful history.