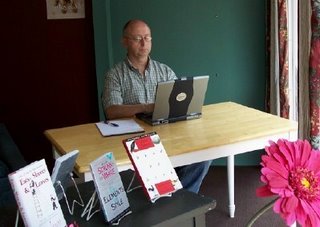 There was a lot going on in the store yesterday, so I wasn’t nearly as productive as I was the first day. I’m planning to take my Bose headphones this afternoon to block any commotion. I did attract some stares on the street, though, and several people came into the store to see what was going on. There was some buzz because the winners of a local high school poetry contest have been announced. I suggested that next year they try a flash fiction contest. After I explained what flash fiction was, the organizer asked if I’d be the judge. It’s a paying gig, apparently, so I said yes!

3 thoughts on “>Writer at Work–Continued”