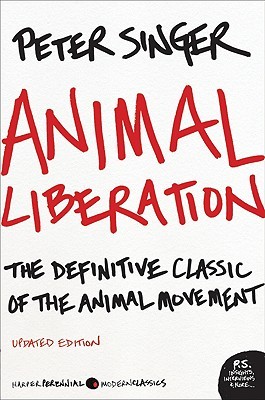 Animal Liberation: The Definitive Classic of the Animal Movement by Peter Singer

I actually read the previous (2002) edition of this book, first published in 1975 because I’ve been meaning to read it for a long time and only did so because my Reading Liberally book club chose it for this month.

The book makes the case for better treatment of animals: elimination of research on animals and the end of industrial farming of animals for human consumption. But it goes beyond that and also makes the case for vegetarianism and veganism. While I don’t know if I’ll be able to put vegetarianism into practice, it’s a compelling case, one that I first accepted when I read a much shorter book, Moral Literacy: Or How to Do the Right Thing by Colin McGinn. Both books rely on the notion of suffering to conclude that it is wrong to kill or otherwise abuse animals as we do. McGinn’s book is purely logical, while Singer piles on the gross details of industrial farming and testing laboratories. The principle for both of them is equal consideration of equivalent interests–basically that human rights do not trump animal rights. I have to say that they both make compelling arguments.

What to do about it?

Do I become a vegan or a vegetarian? Most probably. (Maybe I’ll start as a pesco-lacto-ovo vegetarian and see how that works out . . .)