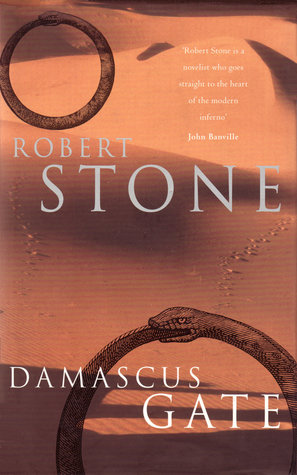 I confess that I’ve only read one other novel by Robert Stone, and I have to say I didn’t care much for Bay of Souls: A Novel. I really need to read his acclaimed earlier novels like A Flag for Sunrise.

But Damascus Gate is quite impressive. There were things about it I didn’t like–the romance seemed forced, for example, although it’s critical to the plot–and things I didn’t understand–much of the history of religion is simply beyond my previous reading–but it still held my attention.

Christopher Lucas is an American journalist in Israel. He’s adrift, both professionally and spiritually, and when he encounters seekers of various persuasions he lets his curiosity get the better of him. That and his heart, because he’s immediately attracted to Sonia, an American activist/jazz singer/Sufi. Sonia becomes involved with something of a growing cult, and both interact with various groups that have dark, secret motives that are gradually disclosed.