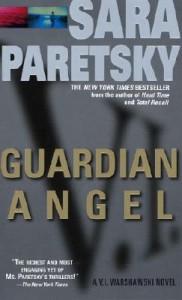 Guardian Angel by Sara Paretsky is, at least, entertaining, and that’s all it pretends to be. Oh, Paretsky’s protagonist, private investigator V.I. Warshawski is a liberal sort, and goes on the rampage against corporate raiders, junk bond dealers, and racism (although not, oddly, the male chauvinists who ALL call her “girly,” for some reason), but that’s about as deep as this story gets.

The plot threads are all connected–VI’s neighbor Sal wants her to help find out what happened to his old pal Mitch, which means she’s nosing around the premises of an old-time Chicago industry; meanwhile, someone is harassing another of her neighbors; and her ex-husband  is, apparently mixed up in both problems.

It’s pretty normal detective stuff (although the body doesn’t show up until fairly late in the game, which, as I understand it, is pretty unusual). Not great literature, but it was a pleasant listen in the car.