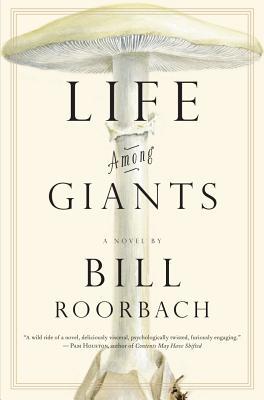 Life Among Giants: A Novel by Bill Roorbach is a terrific read. Very entertaining. This is the first of Roorbach’s books I’ve read and I read this one because I’m moderating a panel he’s on later this week at the Virginia Festival of the Book.

I’m so glad I did! The book is a first person story told by David “Lizard” Hochmeyer, a very tall football player–we see him in high school, as a pro with the Miami Dolphins, and as a retired player who runs a restaurant. Very early on in the book, David witnesses the murder of his mother and father. The rest of the book explores how and why that happened and who was behind it. But it also explores the relationship David has with his bi-polar sister Kate and with his eccentric ballerina neighbor, Sylphide. These are larger than life characters, so it doesn’t bother me at all when they do things that are implausible for real people. It doesn’t matter because I’ve already accepted who they are.

It’s a very entertaining read and I’m looking forward to talking to Roorbach about it on Friday. (It reminded me in some ways of Kevin Wilson’s The Family Fang, which also deals with a complicated brother-sister relationship and their unusual parents.)