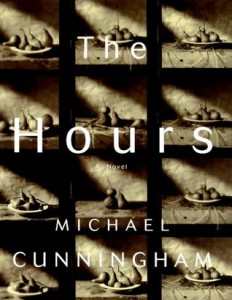 I’ve had The Hours by Michael Cunningham on my shelf for a long time—I have it in hardcover, if that’s an indication—and it was published in 1998. (My copy has a “Winner of the Pulitzer Prize” gold sticker attached.) So I should have read it before now. No excuses, other than that there are lots of other books out there that also deserve to be read.

But I pulled it out last year to move it into my TBR queue because I started working on a novel that takes place in multiple periods, decades apart. When I attended a program at last year’s Virginia Festival of the Book one of the authors mentioned that her novel (Pamela Redmond, The Possibility of You) was timed in a similar way and part of her writing preparation was to read and analyze how Cunningham had done it in The Hours. So I figured I should at least read the thing, to see if it would help.

I don’t know that it really will help me much, but I enjoyed the read anyway. Everyone has probably read the book already, but it’s set in three different periods. One features Virginia Woolf in the 1920s in the suburbs of London as she’s in the process of writing Mrs. Dalloway, and struggling with her own fragile mental health. Then there’s the thread set in New York in the late 1990s which features a woman, Clarissa (known by her dying friend, Richard, as “Mrs. Dalloway” because the character’s name was also Clarissa), who is in a committed relationship with another woman, Sally, but who in her youth was in love with Richard. And in between those stories we have Mrs. Brown’s story, set in Los Angeles in 1949, as she is facing a second pregnancy and is somewhat ambivalent about her young son, Richie (who, it turns out, is the Richard of the 1990s story). She’s contemplating suicide.

It’s fairly depressing, since we know Woolf’s fate—suicide in 1941. Mrs. Brown is thinking of suicide herself and is reading Woolf. In the 90s, Clarissa seems fine, but Richard, dying of AIDS, is in a bad way. Near the end of the book, he says: “I don’t know if I can face this. You know. The party and the ceremony, and then the hour after that, and the hour after that.” Clarissa tells him he doesn’t have to go to the party or the ceremony. And he says: “But there are still the hours, aren’t there? One and then another, and you get through that one and then, my god, there’s another. I’m so sick.”

Terrific book, whether or not it will help me write mine.