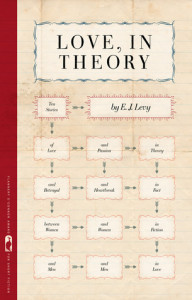 Love, in Theory: Ten Stories (Flannery O’Connor Award for Short Fiction) by E.J. Levy is a terrific collection of short stories, linked by their general theme–they’re mostly stories of disastrous love–and by the idea of they theory (“The Theory of Dramatic Action,” “My Live in Theory,” “Theory of the Leisure Class,” etc.).

I met E.J. at VCCA a couple of years ago, and I vaguely recall her reading from this collection, which was then in progress. (Or, at least, when I read the concluding story, “The Theory of Dramatic Action,” I was sure that I’d read it before, in part, so that’s my, ahem, theory.) And then, as it turned out, we were both on the same short story panel at the Virginia Festival of the Book this year. I had hoped to finish reading her book before the festival, but, alas, that didn’t happen.

This collection won the Flannery O’Connor award, which is reason enough to read it.