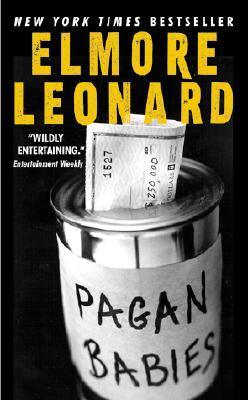 Pagan Babies by Elmore Leonard is entertaining. It seemed, in the first half, as though it might be more than that, but in the end, that’s the best I can say about it.

The book begins with Father Terry Dunn in Rwanda in a church that serves a village hard hit by the genocide. This seemed like a departure for Elmore Leonard (although, have I read Leonard before?) but it was fascinating, dark, and very serious.

Then the perspective switches to that of Father Dunn’s brother back in the U.S. He’s a personal injury lawyer, and that alone was to suggest that maybe there is a connection to the normal Leonard subject matter after all.

And then these stories connect, leaving the seriousness behind, going only for “entertaining.” That should be enough, and the rest of the book, with that in mind, was satisfying. (I can’t really say more without giving too much away.)