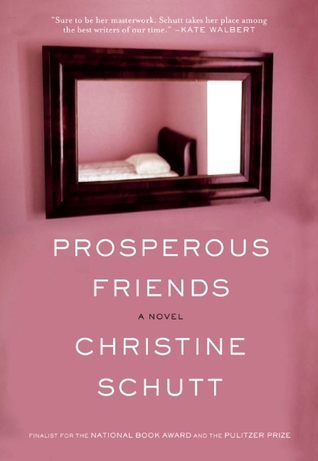 Prosperous Friends by Christine Schutt is probably not for everyone. But if you like lyrical sentences and complex characters, and don’t need to have a raucous plot, you’ll like this book very much. I did.

The writing is stunning, and the characters of Ned and Isabel are fascinating. And there IS a plot. It’s just not one that involves much mystery or action. Consider this book the antidote to Gone Girl, by Gillian Flynn. The enjoyment of that book was in its breathless pace and surprise (fueled, it has to be said, by deception), but the characters were flat and implausible. Here, the reader practically feels Ned and Isabel in the room with him.

Maybe because they’re writers? They meet at Columbia. They marry, too soon, probably, they go to London, travel on the Continent. They come back and they’re not very happy. He’s struggling to find his voice—he writes short stories and can’t get a collection published, imagine that—and she’s just floundering. And then there’s Phoebe, Ned’s ex-girlfriend. Isabel is jealous, sort of.

More fascinating characters: Clive and Dinah. Clive is a somewhat famous painter (and uncle of Phoebe’s husband Ben). Dinah is his current wife. Sally is Clive’s depressed daughter. I would gladly have read more about them all.

And sex? Schutt’s writing style is elliptical, and so much of what happens is missing, but is there just the same. Beautiful stuff.

Here’s a review of the book by Ron Charles in the Washington Post.

By way of disclaimer (and bragging), I should say that Christine Schutt was kind enough to blurb my book (which you can read more about here).