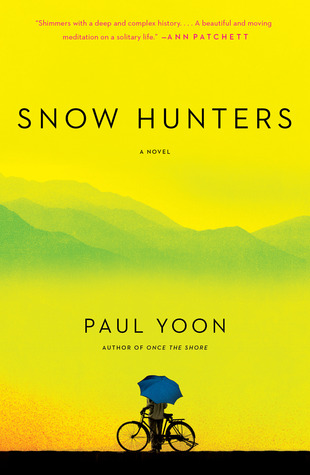 It’s not that I didn’t like this book. I did. It’s a short, quiet narrative that I was quite interested to follow. But I am puzzled by it, too. It is extremely quiet. Very little happens, at least not in the present, which is what forms the bulk of the story. And the language is surprisingly static, perhaps on purpose. (Start counting the instances of the verb “to be” and you’ll quickly lose track, there are so many.) There are also some odd shifts of point of view that I thought were unnecessary, and there’s not a whole lot of dialogue, either. In general, it’s a story that feels “told” as opposed to being “shown,” and as a result, I just can’t say that I love it.

On the other hand, it’s an intriguing story. Yohan is a North Korean who is captured during the Korean war and imprisoned in the South. Eventually, a year after the war, he chooses not to be repatriated and so, instead, is sent to Brazil where he becomes an apprentice to a Japanese tailor. (The story begins in 1954, and Yohan describes the hill town in Brazil, mentioning the television antennas. I thought this was odd. TV did come to Brazil before this date—although it probably was only in major cities—but would Yohan, who grew up in North Korea and was a prisoner in the South, where TV didn’t arrive until later, even know what the antennas were? We also get lots of flashbacks as we learn about Yohan’s friend Peng, and also Yohan’s father) He interacts with the local people, eventually learns Portuguese, and becomes attached to a couple of homeless children. Time passes . . .

I think the review of this book in the New York Times hits on my discomfort here. Yohan doesn’t seem to want anything. He is disconnected and seems content to remain so. As Tatiana Soli writes, “While this reticence might seem logical in the context of Yohan’s postwar trauma, it is mirrored to some extent in all the characters. Inaction, like happiness, is a form of narrative stasis that is difficult to write about. No matter how strikingly rendered, a series of moments and images ultimately needs causation rather than mere accumulation to move the story forward.” Soli lets him off easily, here, because I think this is a significant concern. Then again, in a novel this short, maybe readers aren’t expected to notice. Writers probably do.

I enjoyed the book, in the end, but it left me wanting more. Maybe that’s a good thing.

(I know Paul and have greatly admired his short stories in the past. I’m looking forward to seeing more of his work in the future!)