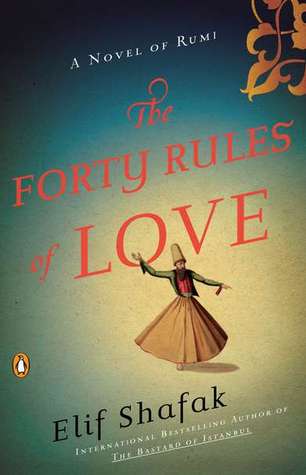 The Forty Rules of Love: A Novel of Rumi by Elif Shafak

I read this for one of the book clubs I participate in, and I was keen to read it because several years ago I had read Shafak’s The Bastard of Istanbul, which I liked very much and commented on here.

I liked this book, although probably not as much as the previous one. This is two books in one: the frame story is about Ella, a Massachusetts housewife (and, suddenly, a reader for a literary agency) and Aziz, and also the inner story which is the book Aziz has written about Rumi and his companion Shams.

The frame story is a bit shallow. Ella is unhappy in her marriage and she finds herself attracted to Aziz. The inner story, on the other hand, is worth the price of admission. It tells of how Shams, a Sufi dervish, came to be Rumi’s companion and helped Rumi become the great poet he is known to be today, which happened in the mid-13th Century. That part of the story was compelling, although it’s told from too many points of view: Rumi, Shams, Rumi’s 2 sons, Rumi’s wife, a harlot, a killer, a drunk, a beggar, etc.

Still, I’m very glad I read the book and would recommend it.