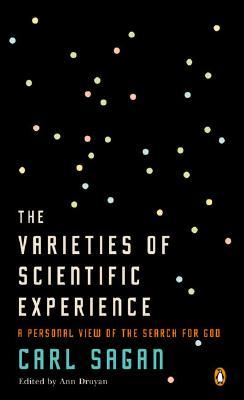 The Varieties of Scientific Experience: A Personal View of the Search for God by Carl Sagan

Our Reading Liberally book club selected this book because the members wanted to read more science. It was a terrific selection and works well, I think, with some of the books we’ve read about religion. For one thing, Sagan is not disrespectful to religion; he does, however, demonstrate the absurdity of most religious belief merely by examining what we know about the cosmos. It’s breathtaking.

The book is from a series of lectures Sagan gave in 1985, so in some respects it is a bit outdated.

We begin with an attempt to understand how vast the universe is. The Big Bang occurred about 15 Billion years ago (or 15,000 Million years, as used in this book) and life appeared on Earth about 5 Billion years ago. And while we don’t know whether we’re alone in the universe or not, it’s important to understand what the possibilities are. There are 400 billion stars in our galaxy, the Milky Way, of which our sun is just one. And there are maybe that many galaxies in the Universe, each with that many stars. (And he hints that maybe we should be asking ourselves if there aren’t also other Universes . . .)

The mind being fully blown, we are then taken through a series of questions concern various topics–extraterrestrial intelligence, the god hypothesis, etc.–and relates our understanding of astronomy to questions of religion.

Tough to be a god-believer after reading a book like that.