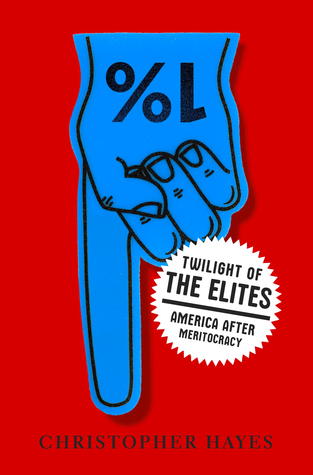 Twilight of the Elites: America After Meritocracy by Christopher Hayes is the selection for February for our Reading Liberally Book Club. (We meet monthly to discuss books on topics of interest to liberals and we’ve been doing this for a couple of years no, a not-particularly-sober complement to another group in town, Drinking Liberally.)

While I liked this book, I don’t think it does enough to prescribe a fix for our broken meritocracy. And it doesn’t do much to clarify what the term “Elites” really means, although part of the point is that it doesn’t really matter–the right-wing smear of liberal elitism misses the point, even if it rings a bell among disaffected conservatives. The fact is that Elites run both parties and are making it increasingly difficult for people to break into their ranks. People with money can get the best educations for their children and access to the best schools, and so testing has become a joke.

But where is this “twilight” Hayes refers to? I see no end to this domination by the wealthy. Unless we try to apply the term “elite” to those who have merit–but these days merit isn’t enough. On the other hand, Hayes also tries to make the case that the Elites are incompetent–citing some high profile failures–but that overlooks the successes.

How, then, do we really create opportunity for the rest of us? The book doesn’t offer much in the way of answers, unfortunately. Overall, I think it’s a muddled argument, dancing around some important issues.