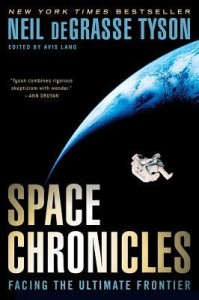 This isn’t a book so much as a collection of Dr. Tyson’s writings that somehow relate to NASA and space exploration. A reader could dip in and out of the book and not miss any part of a continuous thread because there is no such thread. In that regard the book was something of a disappointment, even though I’m a fan of Dr. Tyson.

The basic message that comes through is that the reason we were able to find the money to develop the Apollo missions and land a man on the moon is the Cold War. Finding the money for space exploration these days, especially sending humans into space, is a lot harder. Still, he says, NASA is valuable and for pure science alone we should be spending more.

My favorite chapter by far is called “America and the Emergent Space Powers,” adapted from a speech Tyson gave in 2005. He begins by decrying the fuzzy thinking of Americans–absurd headlines he’s seen and arguments supporting various propositions. Such as:

The same chapter recounts the amazing achievements of the Arab world 1000 years ago. He blames the decline in scientific preeminence on the ideas of the Muslim theologian Al-Ghazali, who declared the manipulation of numbers to be the work of the devil and promoted the concept of Allah’s will as the cause of all natural phenomena. End of scientific achievement in the Arab world. Sound familiar?

There’s more in that vein in the chapter.

Many of us were inspired by the space missions of the sixties. The space shuttle missions never quite captured my imagination in the same way. So I’m all in favor of a mission to Mars. Let’s get excited about space again.