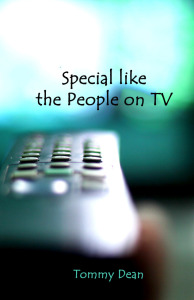 Special Like the People on TV by Tommy Dean

This is a fiction chapbook by a friend who graduated from my MFA program after I did. It’s worth investing the time to read this slim volume, if only for some exciting turns of phrase. One woman is described as “a half moon of beauty, even in her forties.” Another is “as safe as a bran muffin.”

But make no mistake: these are dark stories. They reveal losers in a downward spiral, children making mistakes that will haunt them, couples living on the edge of catastrophe. And all of them, it seems, think things could have been different if only that last break had gone their way.

In the opening story, “Alone, Baby,” the protagonist is a woman whose husband has gone in search of a pregnancy test–unwanted, failed, or wished-for pregnancy is a theme of the book. Sitting alone in a parking lot, she notices a child left alone in a car. Where is the mother? Doesn’t she know it’s not safe? When the mother returns, the woman realizes the struggle she faces, doing the best she can, which will never be enough.

In “The Weight of the Moon,” the main character is set to rob at gunpoint a drug dealer. He needs the money–he’s made some bad choices and the bills have piled up. And this seems like another bad choice in a long series. “The money,” he says. “Now. Or it’s over for both of us.” He’s right about that, I think. It’s over for him.

Some of the stories here are very short, less than a page, such as one of my favorites, another featuring a wished-for pregnancy, “Compatible.” It begins: “He felt that by getting married he had made some kind of half-hearted promise to give her a child. Twelve years later, he had run out of excuses.” In another story, a woman can’t stand the sight of a family of snowmen because she’s unable to get pregnant. In another, a teenager sits in her bathroom, trying to find the courage to take a pregnancy test.

Although the impact of the stories taken together is quite bleak, each of the stories is a gritty slice of hyper-realism. You know the people in these stories, I would guess. I surely do.